No animals were harmed during the making of ROAR. 70 cast and crew members were. Screening Wednesday, April 15th at 7pm, with a video Q&A featuring co-star John Marshall. 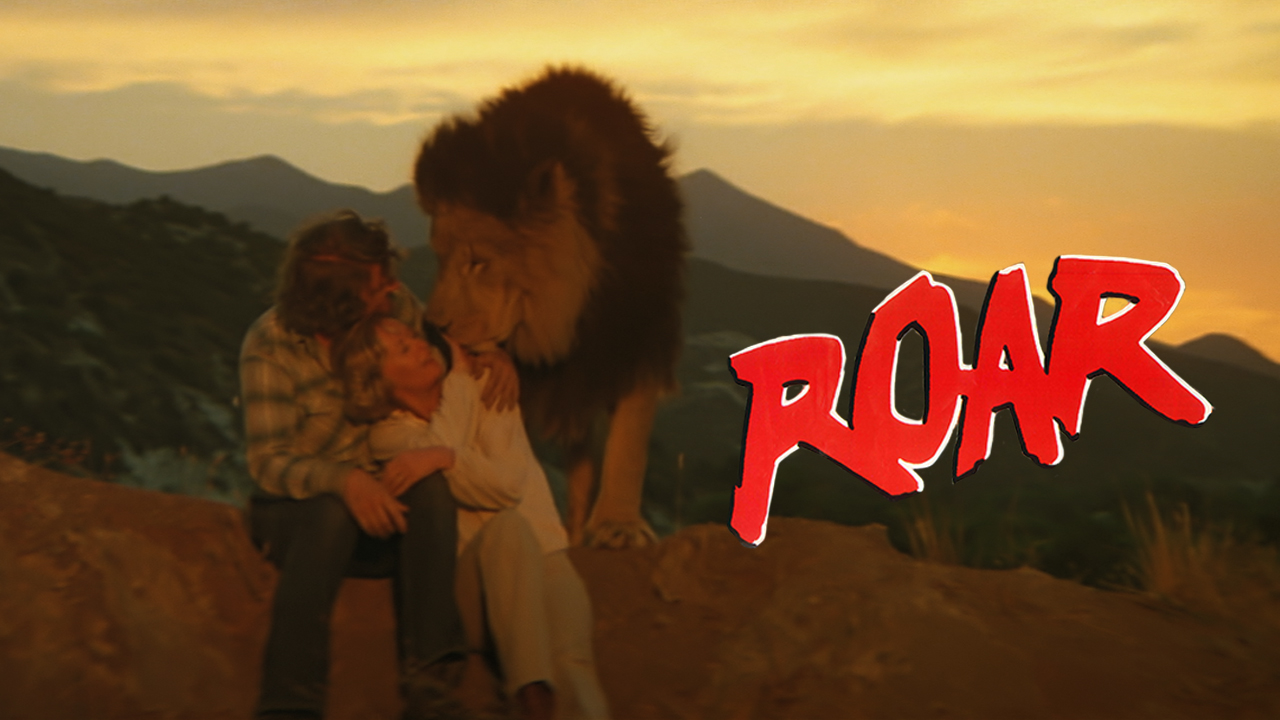 ‍"As a portrait of recklessness and beastly terror, it's Citizen Kane." - Esquire

Homebound audiences around the world have been mesmerized by the antics of zookeeper “Joe Exotic” in the TIGER KING limited series, so this month Alamo Drafthouse Cinema is proud to re-release ROAR, the once-forgotten 1981 film that shows what happens when mere mortal humans meet dozens of tigers and lions. Called “the most dangerous movie ever made”, no animals were harmed during the making of the film, but hundreds of cast and crew members abandoned the project and 70 were injured, including the on-camera mauling of a 14-year-old Melanie Griffith.

"It's like Walt Disney went insane and shot a snuff version of Swiss Family Robinson." - HitFix

After very successful Alamo-At-Home screenings of the programming series Terror Tuesday and Weird Wednesday, Alamo Drafthouse's Fantastic Entertainment is using Vimeo’s VOD platform to bring ROAR to the masses beginning April 15th, along with a video Q&A featuring John Marshall, one of the film’s stars. The company is also aligning with fellow exhibitors and partners so that they can host their own virtual screenings.

10% of ticket grosses at all theaters will be donated to The Will Rogers Motion Picture Pioneers Foundation’s Pioneers Assistance Fund, which is dedicated to helping people who work in the motion picture industry. Currently, the PAF is providing financial assistance to theater employees furloughed by the COVID-19 crisis.

"ROAR is so singular, so breathtaking... you've never seen a movie like it, and there will never, ever be a movie like Roar again. I’m delighted we’re able to bring it straight into people’s homes.” – Tim League, Alamo Drafthouse founder and CEO.

Originally released in 1981, ROAR was directed by Noel Marshall, a former Hollywood agent and producer on THE EXORCIST. It stars Marshall, his two sons, his wife Tippi Hedren (THE BIRDS), and his step-daughter, a teenage Melanie Griffith. The film was produced over a five year span on location at Marshall and Hedren’s wildlife preserve in California. A comedy, it follows the adventures of an American family living with lions and tigers on a nature preserve in Tanzania.

The film was a box office dud upon its initial release, generating only $2 million in sales. But the cult status of ROAR grew, eventually leading to a theatrical re-release in 2015.

"I finally got to see Tippi Hedren’s real-life snuff movie starring her entire family that was made in 1981 but not released in the US until 2015. Watch, slack-jawed, as Tippi is scalped and her daughter Melanie Griffith mauled by the wild-animal extras who turn out to be the real stars of this nutcase action film." - John Waters, ARTFORUM

THE GRANDEUR OF ROAR

At Los Angeles' legendary Cinefile Video, my favorite shelf is labeled "Holy F***ing S***." There you'll find rare discoveries that are beyond comprehension, movies so outlandish and surreal that you cannot fathom the divine providence that allowed such mind-bogglingly singular films to exist. One of our primary missions at Alamo Drafthouse is to source and rediscover forgotten classics that are worthy of this shelf. MIAMI CONNECTION resides here, as does THE VISITOR. I am proud to share that we are partnering with Olive Films to unleash what I consider the next Holy F***ing S*** masterpiece: Tippi Hedren and Noel Marshall's ROAR.

ROAR began while Tippi Hedren and her husband/manager Noel Marshall were shooting in Africa. After wrapping production they toured several safari wildlife preserves and were struck by the scene of an abandoned plantation house overrun by a large pride of lions. The image took root and inspired the epic eleven-year journey to create ROAR.

Hedren and Marshall quickly became devoted to raising awareness about the overhunting of wild lions, tigers and jaguars, as well as the inhumane treatment of big cats in captivity. They were convinced ROAR would raise awareness about what was fast becoming their purpose in life. Upon approaching animal trainers for support, they were told their idea was a suicide mission and were dismissed as "brainsick" and "completely and utterly insane."

Undaunted, Hedren and Marshall soon learned that big cats were extremely territorial and would never coalesce unless they were raised together. In response, they began covertly adopting and breeding lions in their lush Beverly Glenn home. For six years, Hedren and her daughter – the emerging young actress, Melanie Griffith – along with Marshall and his three sons lived, slept and ate with a growing pride of lions inside their home.

As their big cat collection rose to over 100 animals, the shadow of Beverly Hills became too restrictive: The entire Hedren-Marshall family created Shambala, a nature preserve 40 miles north of Los Angeles, and began shooting.

Due to their familiarity with the animals, the entire cast was composed of Marshall, Hedren, their four children and a few seasoned animal trainers. Emerging European cinematographer Jan de Bont (SPEED) was recruited to shoot the film, his first American production. What followed was five years of the most terrifying and dangerous filmmaking ever committed to celluloid.

The cast and crew endured countless injuries, with over 70 bloody attacks documented. While nobody was killed, there were several close calls, most notably de Bont being scalped by a lion resulting in 220 stitches on his head. Hedren endured a fractured leg and deep scalp wounds. Griffith was mauled by a lion, resulting in over 100 stitches and reconstructive surgery. Noel was gored so many times that he was eventually hospitalized with gangrene. Maintaining a consistent crew became virtually impossible as injuries and safety risks kept them from returning to set. The production also endured multiple floods-including one that wiped out the entire set-wildfires, a feline illness that decimated their cat population and non-stop financing woes.

Financiers pulled out two years into production, forcing Hedren and Marshall to sell virtually everything they owned to personally finance what would become a massive $5 million dollar production. Prior to producing, directing, writing and starring in ROAR, Marshall was an executive producer on THE EXORCIST, the proceeds of which partially funded the production. As disaster after disaster plagued the set, crew began to believe that Roar had fallen prey to the legendary "curse of the EXORCIST" by its financial association.

Refusing to yield to the intense adversity, de Bont, Hedren, Marshall and their family continued to heal wounds, rebuild sets, and hire crew after crew to wrap the production. The infamously disastrous production stories of APOCALYPSE NOW and THE ISLAND OF DOCTOR MOREAU pale in comparison to the danger and chaos that was overcome on the set of ROAR.

When the movie finally debuted in 1981, ROAR was deemed by Variety as the "most disaster-plagued film in the history of Hollywood." It was also a financial disaster. Fortunately, the passage of time affords us the perspective to view Roar for what it truly is: the most epic and amazing animal thriller ever made. It plays out like a fever-dream Disney movie. The lighthearted slapstick of the surface masks one of the most intense, white-knuckle, nail-biting thrillers ever seen. The cast is in constant mortal danger as dozens of adult lions "improvise" around them. At numerous times Marshall drips blood as he fends off ferocious advances from jaguars and tigers alike. Melanie Griffith's real-life mauling is on display in the final cut. A jaguar licking honey off Tippi Hedren's face was an untested idea that could have easily ended very, very badly. Knowing the backstory of the production, you can see perpetual terror in the eyes of the cast as an army of lethal predators close in around them.

Noel Marshall and Tippi Hedren pulled off the impossible: For 11 years they crafted a movie that everybody said couldn't be made. And in so doing, they managed to contribute significantly to the methodology for humane treatment of big cats in captivity. To this day, Hedren and her Shambala reserve work to build trust and understanding with big cats through constant, loving human contact.

You've never seen a movie like ROAR and there will never, ever be a movie like ROAR again. We are extremely proud to expose Roar to a whole new audience and salute its esteemed place on the "Holy F***ing S***" shelf for all the right reasons.